END_OF_DOCUMENT_TOKEN_TO_BE_REPLACED

Like Loading...
December 6, 2013February 19, 2014 | Rekha Vengalil
A guest post for a beautiful blog and lovely friend…
It’s not been long since I met Shey of JUST NOT THE CAKES but in this short span of interactions, she comes across as a warm and affable person. Truly blogging has got me connected to some wonderful like-minded people. Her space has some lovely recipes and she also share some great Sri Lankan cuisine.

The recipe I share today is the famous south Indian recipe “Mutton Chukka”. So please hop over to Shey’s space to read more of the recipe I share.
Thank you Shey for having me over and I enjoyed doing the post for you.

Time for a Guest Post again! It’s indeed very exciting featuring some incredible bloggers who I do share a wonderful amity.
It’s such a joy to have Vineetha of “Malabar Ruchi” over. Welcome Vinee!Its indeed a pleasure having you over.
I am extremely happy to have met Vinee here in the blogosphere. A wonderful person and a versatile cook. Yes! Our comments on each other’s space gave way to a beautiful friendship. Ruchi is a blog I refer very often for some lip smacking Kerala recipes (even much before I joined the blogging community); a humble blog with so many wonderful recipes. Her repertoire goes from splendid Malabar recipes to some great bakes and cakes. So don’t forget to head over for some yummy goodies!
Now over to Vineetha…
It was during one of my lazy afternoon browsing session that I stumbled upon Rekha’s blog accidentally. I was totally impressed by her blog, her beautiful pictures and superb collection of recipes. I immediately became her FB fan and  left few comments and  it led to  the beginning of a new friendship ! The one  good quality that  I really like about Rekha is the way she support and encourage other bloggers. I have seen Rekha sharing fellow bloggers recipes on  her Social media platform. It is indeed really sweet of her to do that and support other blogs.
I have to say Rekha  is a versatile blogger as she contributes a variety of recipes, some of them are very unique and innovative. Picking few favourites from her blog would be a tough job but few pictures which left me drooling are Gongura Mutton, Bread Gulab Jamun, Mediterranian Meat balls and Malai Kofta.
Thanks you  Rekha for inviting me for a guest post, its indeed a pleasure to do a guest post for friends.

Coming to todays post, it’s a melt in mouth kind of cookies with crunchy cornflakes coating. I tried this recipe from MyKitchenatics and it was a hit expect that it was a  bit less sweet to our liking, so the second time I made this I added a bit  more sugar to adjust to our liking and it was perfect.
Ingredients  ( makes 20 cookies) 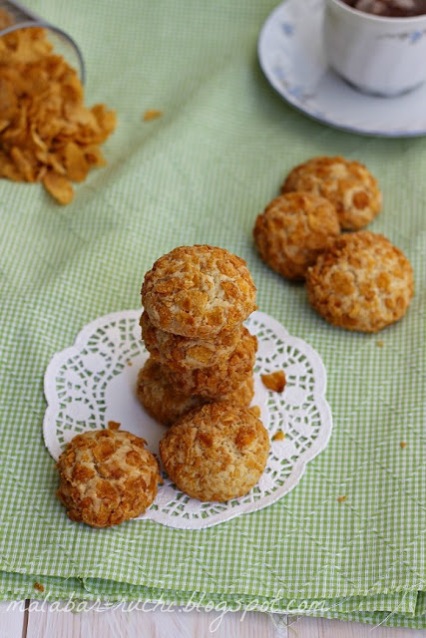 Method
Take flour, cornflour, baking powder in   a mixing bowl and stir until combined.
Cream butter and Sugar for few minutes until fluffy.
Lightly beat egg in a bowl and add this to the creamed butter.
Add vanilla extract and beat until combined.
Add the flour mixture to it and fold until combined. 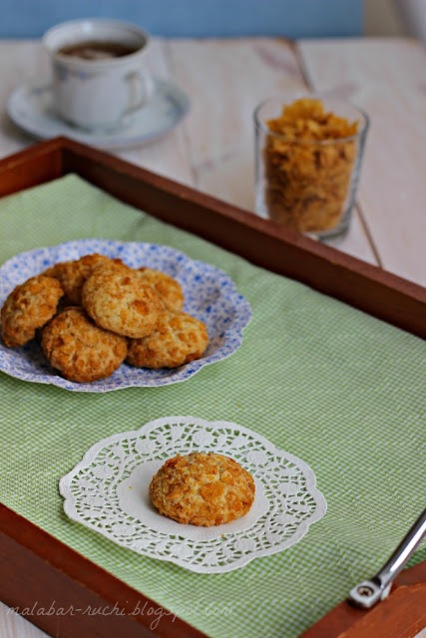 Scoop out a tsp of the batter and roll it into a ball and roll them in crushed corn flakes.
Place them in a baking tray lined with a baking paper leaving few cms between each balls.
Bake them in preheated oven at 175 degree C for 25 minutes.

Thank you Vinee for the wonderful recipe and your time. Wish you all the very best and stay blessed always.
Dear friends/readers, hope you liked the post and recipe. We are looking forward to hearing from you and thank you for your time.
See you soon with a new recipe. Till then…
Take care

It’s a guest post for a dear friend Avika from “A day through my life“, who I met here in the blogosphere. It’s been an absolute pleasure to have met her and she really has a great space with some mouthwatering Kerala recipes and others. Her recent post of Unniyappam did keep me drooling over. Thank you Avika for sharing your space for my post. Its been wonderful meeting you. God bless.
Well not talking any further and  over to Avika’s for the recipe I share – “Dhingri matar”and browse through her space for some really mouthwatering recipes.

Like Loading...
September 19, 2013February 12, 2014 | Rekha Vengalil
Today is my guest post for Gheza-E-shiriin by Huma. It’s been an absolute pleasure to have connected with Huma. I first took notice of her blog during Ramadan where she had a event going ” Ramadam – an event to share” ever since I have been a regular at her place.
My excitement knew no limits when Huma asked me to do a post on food styling and photography. I immediately agreed to share my little ideas and thoughts of something I love doing the most.Please click here to read more as I share what little I have learnt over this one year of my blogging and photography.

Thank you for taking your time to read through my thoughts. Looking forward to your comments/feedback/suggestions.

Like Loading...
June 1, 2013February 12, 2014 | Rekha Vengalil
This is my first guest post and its for a beautiful blog Elephants and coconut trees by Meena, the name that really fascinated me. I can’t thank Meena enough for giving me this opportunity do the the guest post. I haven’t met her yet and we got to know each other though our blogs and e-mails. But I must tell you she is one of my best blogger friend now. It’s wonderful to have met you here Meena.
She has some great collection of recipes and its hard to choose yet here’s a few of my favorites from her blog. Do Visit her blog for great recipes.
The recipe I choose for the post was Penang Chicken curry. I know she loves chicken because every time I post a chicken recipe, she tells me she is drooling. Thought of something from this part would be lovely. This is a mix of Malay, Thai and Indian.

Thank you for this e-set sari Meena 🙂 Loved it.

Like Loading...
May 6, 2013February 12, 2014 | Rekha Vengalil
I know there is not much happening on my blog apart from my recipes. So thought of kick starting with a Guest post. Happy to introduce you to my dear cousin Priya who along with 2 friends are the proud owners of the blog Drooolsss…  Visit their blog for some really interesting recipes. I am sure it’s going to leave you drooling!
I am really thankful to her for having accepted my invite to do a post in a short notice.  I am glad we share similar interests (in food). Food is our main topic every time we talk/chat 🙂

Here is a Manakesh Zaatar and it’s Arab. This is the plain or simple version. This also comes with a combination of cheese which is apparently tastier. But if you prefer it healthier; then this one’s for you.
Here’s a little note from Drooolsss… – “Zaatar” in Arabic is a traditional Middle Eastern herb mixture popular in countries such as Palestine, Jordan, Syria, Lebanon and Turkey. It is traditionally eaten as part of a healthy breakfast with flat bread and olive oil or yogurt cheese. It is also used to spice chicken, meat and vegetables and can be mixed with olive oil and vinegar to make a salad dressing.
It is a mixture that is made out of mostly dried thyme, oregano, sesame seeds and sumac….there are many variations to it that consists of cumin, coriander, fennel seeds etc.
In UAE, it is readily available in all the grocery stores. For all those of you who are not in the Middle East can find it in the grocery store that sell Arab groceries or you can even make it at home.
Manakesh, manakeesh or Manaeesh is an Arabic food consisting of a dough similar to a pizza dough, topped with zaatar, cheese(Akaawi cheese) or ground meat, but used widely in many Levantine countries such as Lebanon, Syria, Jordan and Palestine. Similar to a pizza, it can be sliced or folded, and it can either be served for breakfast or lunch.
A very tasty and healthy dish, served along with a cup of sweet black tea.
For the home made zaatar you will need –
How to-
Coarsely grind the sesame seeds in a food processor or with mortar and pestle. Add remaining ingredients and mix well. That’s it, zaatar is ready!!!
This can be stored for a long period if kept in an airtight container in a cool and dark place.
To make Manakesh Zaatar you need –
How to –
Mix the yeast in ¼ cup of lukewarm water and let it sit for 15 minutes.
Mix the zaatar with the olive oil and keep aside.
In a bowl mix the flour and salt. Add the yeast solution and knead well to form a soft dough by adding water little by little.
Grease a bowl with a little oil and transfer the dough into this bowl. Cover the bowl with a moist kitchen towel and keep it in a warm place for 1- 2 hours. After 2 hours the dough will rise and double in size.
Knead the risen dough on a floured surface for a few minutes. Now divide the dough into 8 equal parts and using a rolling pin, roll out each portion into your desired thickness and size(thickness depends on whether you want a crusty or soft base. For a crusty base roll out into thin rounds and for a soft base roll out into thick rounds.)
Using a fork prick generously on the rolled out bases. Now smear one tablespoon of the zaatar and olive oil mixture on each base. Spread it all over the base.
Bake these in a preheated oven at 350F for 12 – 15 minutes.
Serve warm with a cup of extra sweet black tea. 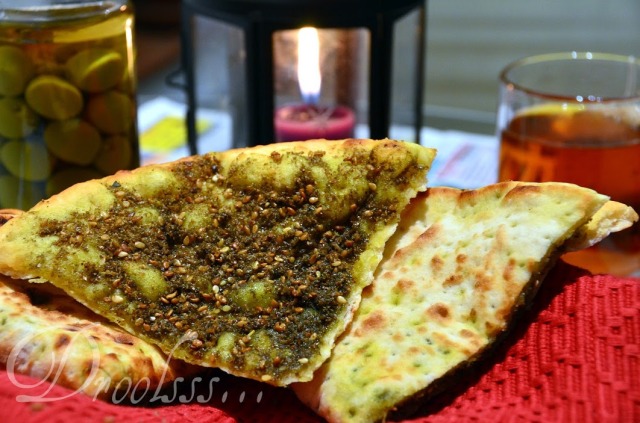